Catalysts B34C are used in MAZDA cars. They are 35 cm long, and their weight is about 0.6 kg. They are symmetrical in shape. What is most characteristic about them is the perforated cover, which can be schematically divided into three parts. The edges on both sides are flattened. B34C catalysts were installed in ,,MAZDA” VI in 1.4 16V and 1.5 16V gasoline engines from the beginning of their production. And today this catalyst cost… 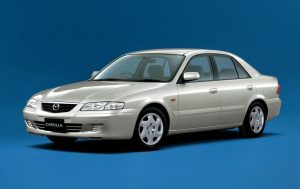 ,,MAZDA VI”, also known as ,,MAZDA Atenza”. This is a medium-sized passenger car, produced by the Japanese company MAZDA since 2002.

First generation ,MAZDA” was introduced in 2002. The range included a four-door sedan, five-door liftback and five-door vehicle, sold in North America as “Sport Sedan”, “5-Door” and “Sport Wagon” respectively. In Australia, the range began with the Limited model, available only as a sedan. Next is Classic which is available as a sedan, hatchback or station wagon. “Luxury” is available in sedan and hatchback versions. 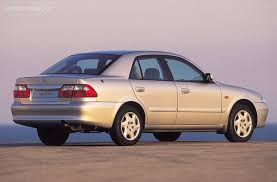 The second generation was introduced in 2007. It was built on a modified first generation platform. Compared to the first generation, the car’s corrosion protection and safety in crash tests have been improved. The second generation is therefore bigger and heavier. At the beginning of its production, 1.8 MZR, 2.0 MZR and 2.5 MZR gasoline engines as well as the previous generation 2.0 MZR-CD diesel engine were installed. This engine was later replaced by a new four-cylinder 2.2 MZR model. In 2010, a series of modifications were carried out, in which all engines were redesigned to be able to meet the increasingly stringent Euro 5 emission standards. The production of the second generation ended at the end of 2012.

The third generation was introduced in 2012. After the MAZDA CX-5, the “six” is another car of this brand that uses SkyActiv technology. Sold as a sedan and station wagon. It is unusual that the sedan and station wagon were at the same price, and that the sedan is dimensionally longer. It is also part of SkyActiv technology. In 2015, the MAZDA6 generation was renewed – the external appearance, driving characteristics, interior design and other details were modified.