The Ford Mondeo is an American midsize D-Class car designed with families in mind. It was started in 1993 by Ford. The name of the model means the Latin word mundus – world or from the Spanish “mondo”, which has the same meaning. In Europe, it has proudly replaced the Ford Sierra. This is evidenced by the 1994 car award.

The catalyst appeared in an upgraded first version of the model, marked Mk II by the manufacturer. Production of this model began in October 1996 and lasted until 2000.
The Mondeo Mk II was a more thoughtful model that took into account the fixes that unfortunately appeared in the debut version. The biggest improvements came in the lighting area. Substantially modified dipped-beam headlamps that were listed as hazardous in the original version. To increase the sense of security, all seats are fitted with three-point, self-locking seat belts. The attribute under consideration is the airbag installed for the driver and passenger from the very first model, which contributed to the first place in the 1994 car competition.
The manufacturer Mondeo has focused not only on safety but also on perceived driving comfort.
The front model did not lack amenities such as: windscreen heating system, cassette and disc storage, the car had a central locking system, electric mirrors and windows, as well as flat-folding chairs, and the radio could be controlled with integrated buttons on the steering wheel. In terms of exterior aesthetics, the bodywork has been changed, the bumper has been greatly expanded, and new rims have emerged. 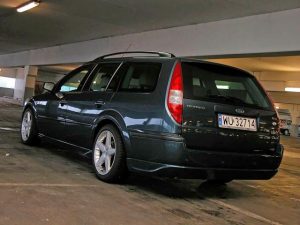 From a negative point of view, faults can be expected due to: premature wear of the front suspension stabilizer, failure of the front wishbone bushes, minor problems due to corrosion of the vehicle’s electrical system or frequent exhaust system.  Despite minor flaws, the car was quite a success.
In the 90s, it was the most popular family and business car.
So far, you can meet many cars on the road with this model.