Catalysts with code 6Q0178AB / 6Q0131701D are small in size. Their length is only 26 cm and the weight of the insert is 0.64 kg. They have an extremely symmetrical design. The middle part, filled with a ceramic insert, is the widest and round in shape. There are inlet and outlet openings on the sides. This catalyst has been used, among other things, by the Skoda brand in the Fabia I model with a 1.4 engine since 2003. 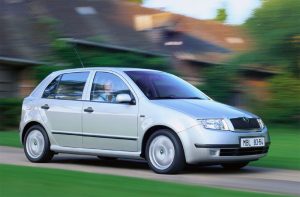 The Fabia is a small car made by Skoda Auto. It was officially introduced in 1999. September 14 At the 58th Frankfurt Motor Show. Initially, this model was available as a five-door hatchback. The car was introduced as the successor to the Skoda Felicia, despite the fact that the two models have long been produced in parallel. Less than a year after the hatchback was launched, the Fabia was introduced with the station wagon, and in 2001. a sedan has joined the range of bodies. 2007 The second generation of the hatchback was unveiled at the Geneva Motor Show, ending production of the first generation. The second Combi series was launched six months later. In the second generation, sedan production was abandoned. The cars were manufactured in Mladá Boleslav. In April 2007, 2 million Skoda Fabia models left the production line, and in May 2012, 3 million. At the beginning of October 2014, the third generation was presented at the Paris Motor Show, and in 2018 it was decided to make improvements to the exterior.

Sales on the European market began in 1999. in December. 2000 he passed the Euro NCAP crash test, which resulted in four stars. The universal model was introduced in 2000. in the fall. A year later, a sedan appeared in Geneva. Already in April 2004, a million copies were sold, and after great success, the sports version of the RS was launched in the summer of the same year. The first front upgrade was made in August, with a new front bumper with round fog lamps, tail tails, a third head restraint and a three-point rear seat belt and center seat. New steering wheels (from the second-generation Octavia) were also prepared, and new seat covers and small details were upgraded.