The 80EB code catalyst is used by the Suzuki brand. These catalysts are elongated in shape and small in size, with a length of about 25 cm and a weight not exceeding 0.67 kg. The catalyst cover has a mounting plate and its edges are smooth.

These catalysts were fitted to Suzuki Swift cars with 1.0 and 1.3 petrol engines and were manufactured in 2000. 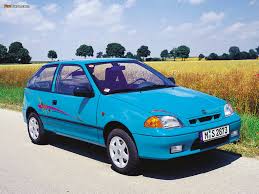 The Suzuki Swift is a Japanese, compact car that has been in production since 1983. This car was presented for the first time on a large scale at the Tokyo Motor Show as a Suzuki Cultus car. The last, sixth series of this car was introduced in 2017.

The first generation was only available for the American, Asian and Australian markets and was available in 4 body styles, including a convertible.

For many years, the model has been sold under various names – Chevrolet Sprint, Holden Barina, Pontiac or Maruti through a number of joint ventures with General Motors.

For the first two series, it was possible to choose this model from two engine units – 1.0 and 1.3 l

The third series debuted in 1994. And it was created by transforming the second car series. It was also available as a Subaru Justy. This car was equipped with a 53 hp petrol engine 1.0.

The car was available as a 3- and 5-door sedan and convertible. The maximum speed the car could reach is only 150 km / h. Much like the first two generations, the third was also sold under GM car group brands.

The fourth series debuted in 2004. It was very different from previous generations. The car was a little shorter, but definitely more spacious, modern, and the interior was solid. With the launch of the fourth series, contracts with General Motors also expired, and Suzuki decided not to export the car to the United States.

After successfully introducing the Swift vehicle to the market, Suzuki decided to implement the concept of a new, improved version of the sport, which was demonstrated in 2012. Australian Motor Show. The car was designed to be as aerodynamic as possible. Sporty headlights with daytime running lights, a spoiler and a modern exhaust system really add to the charm. In addition, the chassis has been strengthened and the brakes have been improved.