The MATIZ catalyst is used by the Daewoo brand. The catalysts are small in size, about 25 cm long and weigh less than half a kilogram. They are characterized by a rather symmetrical and at the same time blunt shape. They have a metal shell which is a continuation of the cover running along the entire catalyst. Catalyst numbers are not listed on the housing, so they are often confused with universal substitutes.
MATIZ catalyst Daewoo brand used in 1998. Matiz 0.8 model, petrol version. The creator was Ismeretlen. 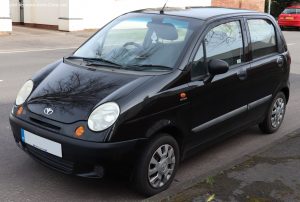 The Matiz is a compact car produced by the Korean car concern Daewoo from 1998 to 2007. It is this model that has become the successor to the popular Daewoo Tico in our country. His name is literally translated as “friend.” The car should be linked to Italy. Daewoo was interested in the design of Giorgetto Giugiaro Italdesign Lucciola, which was unveiled in Bologna in 1993. It was an eco-friendly vehicle with a hybrid drive and an aluminum body that was easy to recycle. The car featured oval headlights, a folding roof and easy-to-operate armchairs. Fiat has abandoned production of this model due to excessive costs and the high risk that the design will not be enjoyed and the investment will not pay off.
He was most successful in Italy. It was sold there until 2004. like Matiz. In 2005-2010, in turn, it was sold as a Chevrolet following the takeover of General Motors by a Korean company. In some markets, it was sold as the Chevrolet Spark, which was replaced in 2009.

The first generation was sold in 1999-2007. Advertising of the model began as early as 1997 after its official launch at the Seoul Motor Show. In order to make the car different from the 1992 conceptual version and emphasize the flexibility of the solutions used, a decision was made to redesign the model and a classic five-door system was decided. As a result, the car has been a great success across Europe. Despite the small size of 3.49 m, the car was classified as a minibus for five people. And how about convenience? Is it a small car that can be comfortable despite its small size?

It turns out that it is probably impossible to design such a small space more functionally. This little car really holds a lot. When we fold the rear seats, we get a boot that is suitable for a large station wagon

In addition, Matiz came in 9 color versions. It is distinguished by a maximally rounded shape and a short front, which ensures excellent visibility. The whole is complemented by slightly curved circular arches and oval mirrors. During the Euro NCAP crash tests, Matiz scored 3 stars out of a possible 5. Today, it may not seem like a staggering result, but then it was more than a satisfactory result. In terms of security, it is also worth mentioning the ABS or EBD system installed in it and the anti-theft alarm system on the door. Initially, it was produced only in South Korea and was destined for local markets. Production then began in Warsaw, where Daewoo used equipment developed by FSO. The success of the first generation was confirmed by statistics, which unequivocally stated that at the end of 2002, 500,000 sales were made in Europe. 157 thousand copies, including Italy alone. Pcs.