FCFE2 Catalyst uses the Subaru brand. These are ceramic catalysts up to 60 cm long and weighing just 0.49 kg. These catalysts have an asymmetrical design, flattened caps and a code at the edge. Catalysts with FCFE2 number were installed in the Subaru Impreza GD WRX 2.0 T in 2001-2005. 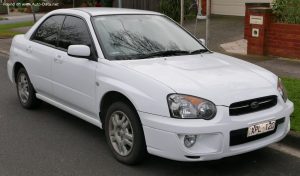 We have already written about the Subaru Impreza on our website. Today we will focus on Model II, also known as the “GD” developers. The second-generation Subaru is a compact car that was built in 2000-2007. produced by Subaru Ota and Gunma in Japan.

The model was developed based on a modified version of the first generation. The new model followed the same pattern as its predecessor, including a similar outline figure. Nevertheless, the stylization and separation of the oval headlamps has provoked considerable debate. This version of the model has earned the nickname Bug Eye among Subaru enthusiasts. The sedan’s body dimensions increased to 45 mm in length, 40 mm in width, and 25 mm in height; wheelbase increased by 5 mm. In addition, in order to comply with Japanese vehicle tax rules, the width of the hatchback increased by only 5 mm to 1,695 mm, leaving it in the “5” classification.

The GD chassis weighed almost 200 kg compared to the GC chassis. Subaru says the NG chassis is stiffer in terms of torque and bundle than the previous model. This stiffness is primarily due to the addition of a steel “ring”. Increased rigidity for passenger safety is also an additional opportunity to ensure greater stability during sporting events. Subaru released this generation of Events to North America in 2001. The 169 kW (230 hp, 227 hp) turbocharger version of the Impreza WRX did not appear until 2002, despite previous plans, and the Impreza WRX STI was postponed until 2004. 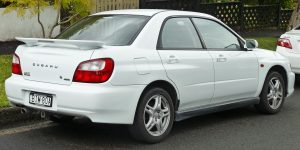 The Outback Sport was sold in Australia from 2001 to 2007, but was renamed the Impreza RV with the same color scheme as the American version. The Australian version had a manual two-bar case that is not available in the US. This event in 2000 became the Wheels Car of the Year magazine.