Catalyst KT0138 is used in German Mercedes cars. These catalysts have an asymmetrical, flat shape and many lateral convexities on the surface. The outlets are arranged in different planes (one is on the side, the other is angled upwards, looking like an extension of the catalyst). The length of the catalyst does not exceed 45 cm, but the weight is 1.74 kg. These ceramic catalysts Used in Mercedes Benz W 163 models. Today, the value of this catalyst is 620 euros. 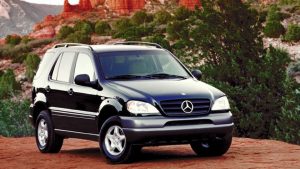 The Mercedes Benz W163 is a luxury ML class car. This is the first SUV brand. It is also the first Mercedes to be manufactured in Vance, near Tuscaloosa, Alabama, USA. In order not to use the names and associations used by BMW, it was decided to change the M symbol and rename the series to ML. This car model belongs to the first time and was first shown to the world in 1997 at the Frankfurt Motor Show. He also made his US debut. Production of the car model lasted from 1997 to 2005. 2001 It was decided to update the exterior, resulting in a change in the appearance of the taillights and the inclusion of turn signals in the mirrors.

It is worth noting that in 2002 June The car was used to create a sub-car of John Paul II. He later also served his successor, Benedict XVI. The car was fitted with a bulletproof windshield, air conditioning in the cabin and the engine was strengthened to reach 170 km / h. speed. The first generation was replaced by the Mercedes Benz W164 in 2005.

Total since 1997 April 1 Until 2011 April 1,170,000 specimens of class ML were produced. The W 163 was the most popular Mercedes model in its class. Nearly 500,000 copies were sold. Anyway, what is the opinion of the consumers themselves about this car?They strongly do not recommend the diesel version. He also mentioned that the higher risk of failure of the flow meter, turbocharger or nozzles should be taken into account. However, the “weak point” of the model is the clogged catalysts, which cause the cold engine to shut down immediately after combustion.

If you have a similar problem, don’t worry! Don’t forget to sell the clogged catalyst to us and get some of your money back!